It’s getting hot in Central Texas.

We’ve been lucky this year in Austin. Due to all the rain, temperatures are still slightly below sweltering!

Now that the warmer temperatures have arrived, everyone is thankful for the modern marvel of air conditioning. It is now possible to be burning up one moment and freezing the next as you move between the outdoors and heavily air conditioned spaces.

Air conditioning is such a part of modern life that we take it for granted.

Until it breaks down and wreaks havoc. 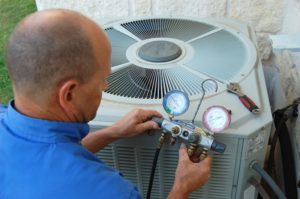 Here’s a little history lesson that will give you an understanding of the myriad ways people attempted to cool down before air conditioners arrived on the market.

Given that the modern air conditioner was not invented until the early 20th century, humans have been experimenting with ways to cool down for centuries.

As people continued to search for ways to cool down, technological innovations enabled the conditions necessary to invent the air conditioner. Experiments in chemistry during the 18th and 19th centuries paved the way for the invention of air conditioning in the early 1900s.

Franklin, Hadley, Gorrie and Tesla all touched the history of your AC.

Benjamin Franklin and John Hadley performed experiments in 1758 to study evaporation as a way of cooling. Their experiments showed that the evaporation of volatile liquids such as alcohol could reduce an object’s temperature below the freezing point of water.

Franklin and Hadley’s experiments led to the 19th-century creation of ice and ice-making machines by John Gorrie in America and James Harrison in Australia. The harnessing of electricity also helped to create the right environment for the air conditioner.

As electrical power spread to homes across America in the late 19th and early 20th centuries, the oscillating fan came into use, thanks to Nicola Tesla’s alternating current motors.

In 1902, 25-year-old Willis Carrier invented the modern air conditioner for the purpose of solving a problem: a printing company’s desire to create consistent, quality materials regardless of the temperature outside.

Without temperature regulation, the humidity of the Brooklyn Air severely impacted the printing company’s paper. The paper would expand and contract, and ink would misalign during the printing process.

Carrier created mechanical drawings for the first modern air conditioner – a series of coils containing cold water, over which air passed. This first air conditioner was built by Carrier and began operation on June 17, 1902. Air conditioning was installed in the first home in America in 1914, and Americans’ first widespread experience with it was in movie houses in the 1920’s.

It spread to department stores, offices and trains in the 1930’s, and 10% of homes had air conditioning by 1965. It was responsible for the migration of Americans to southern cities, as previously unbearably hot places became livable. A study by the Residential Energy Consumption Survey stated that in 2009, 87% of U.S. homes have air conditioning.

Air conditioning is now as ubiquitous as water, and we may not realize that modern society has been built around the assumption of air conditioned homes and buildings.

People are now able to live in places that were previously uninhabitable without air conditioning, and in structures that require air conditioning to be livable. Imagine living through Austin summers with no AC, especially in one of those high-rise apartments downtown!

Sleeping, a basic human need, is made easier through AC. Back in the say, during sweltering summers in New York, the omnipresent heat would force families to sleep outside in parks, camped out next to their alarm clocks, hoping to catch a stray breeze.

In addition to indoor sleeping, we can now use a hot oven or stove, apply makeup and fix our hair, perform manual labor more comfortably, and filter outside pollutants out of our homes. These are all things most of us can’t imagine living without, thanks to the wonder of air conditioning.

To give your Air Conditioning Unit some love before it gets really hot – contact ABC Home & Commercial Services for a service appointment.

ABC Austin Has You Covered
ABC is here for any needs you might have whether you might need landscaping services, pool cleaning, pest control or more!
Schedule A Service