Memorial Day usually signifies the semi-official kickoff of the Summer outdoor season — it’s time to let the fun begin with picnics, backyard Bar-B-Qs and pool parties. However, nothing can derail a good time faster than a painful sting from one of the Houston area’s line up of common stinging insects.

Below are the most likely suspects, some info on where they are likely to nest and the best ways to ensure they don’t ruin your good time. It should be noted that many of the below bad bugs are very unlikely to sting you unless they perceive you as a threat to their nests or colonies. 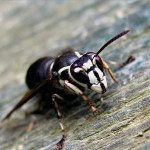 Aggressiveness: Bald-faced hornets are the most aggressive wasps in Georgia. Getting within 10 feet of their nests can earn you a pretty nice multi-sting welt or worse.

Where they live: Bald-faced hornets’ football-shaped nests are built of paper and usually are suspended from trees, shrubs, on overhangs, utility poles, houses, sheds or other structures. Sometimes they will also build nests in the ground or in hollow trees or other voids. A few “sentry” hornets stay close to the nest to watch for potential threats. If the sentries sense danger, they immediately alert the rest of the troops and attack.

Best Defense: Due to the aggressive nature of these guys, the best defense is reconnaissance and calling in air support. Walk your property and eyeball any likely nesting areas close enough to your property where your guests might be perceived as a threat. Bald-faced hornets are drawn to protein, especially meat. So, try to keep all unattended plates cleaned up and deposited into a sturdy trash can with a tight-fitting lid.
Removing a Bald-faced hornets’ nest is definitely not a DIY project, each hornet can (and will) sting multiple times if threatened – call a pro. 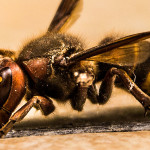 Aggressiveness: European hornets are larger than many other hornets, often growing to an inch and a half in length. While these hornets are considerably less aggressive than bald faced hornets, but they’ll still attack en masse if they feel threatened or swatted.

Where they live: European hornets rarely build exposed or suspended nests. Most commonly, these hornets build their nests in hollow trees and similar voids in buildings. If they build a nest inside buildings, you can usually smell their droppings.

Best Defense: In early morning when these pests are least active, look in any hollow tree trunks for their brown paper nests. Also, check any sheds or other buildings that could house a nest, and sniff for the tell-tale odor of hornet droppings. They are not typically drawn by the scent of human food or drink, but they are attracted to light and are very active at night. So, keep an eye out if your party extends past sundown.

While European hornets don’t exhibit the same ferocity as some other wasps, they will defend their nests and their nests are often located in hard-to-reach places. For this reason, it is recommended to call in a professional to remove a nest. 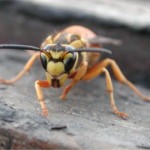 Aggressiveness: Yellow jackets are slow to sting unless their nest is threatened, in which case they become very aggressive. Unlike bees, yellow jackets are capable of stinging several times, inflicting severe pain.

Where they live: Yellow jackets tend to build nests on trees and buildings, as well as in the ground. These insects are likely to come in contact with humans because they are attracted to sweets and proteins. It is important to take steps to cover food during an outdoor event and to clean up and properly dispose of food and garbage after a BBQ to keep from attracting them.

Best Defense: Once again, visual inspection around the property looking for a number of yellow jackets coming and going will help identify nests. Yellowjackets are drawn to protein and sugary substances. So during your outdoor activities, quickly dispose of any unattended plates or sweet drinks in a sturdy trash can with a tight-fitting lid. 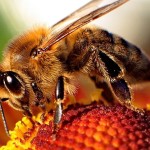 Aggressiveness: Honey bees are relatively gentle and will primarily attack when defending the hive. Bees that are out foraging among flowers for nectar and pollen usually sting only if stepped on or swatted.

If you approach their nest, they’ll defend it but only within the immediate area, they won’t chase you. A honey bee can sting only once, and the act of stinging is fatal to the bee. So the honeybee stings only as a last resort, sacrificing its life to protect the colony.

Best Defense: If a honeybee colony has moved into a tree or building on or near your property, it is often easy to tell based on the constant coming and going of bees. Honey bees are attracted to sweets, especially liquid sweets and will crawl in open soft drink cans, on straws and bottle tops. So, it is best to keep soft drink cans or disposable cups in sturdy recycling bins or trash cans with tight-fitting lids. If you need to remove a honey bee colony from a tree or building on your property, it is best to contact a professional that is trained in relocating honey bee colonies. 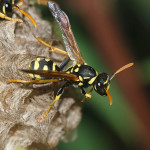 Aggressiveness: Paper wasps will generally only attack if they themselves, or their nest, are threatened. Unfortunately, paper wasps often build their nests in close proximity to where people regularly engage in outdoor activities. So, while they may not be as aggressive as some species, they come into contact with humans on a frequent basis. This fact can make them more likely to adopt a defensive position. Like yellow jackets, wasps can and do sting more than once. It’s also important to note that these insects often call for backup using alarm pheromones to help them defend the nest.

Where they live: Paper wasps build their nests on twigs and branches of trees and shrubs as well as porch ceilings, soffits, eaves, attic rafters and similar covered places – all of which can put humans at risk of accidentally contacting the nest and inciting a wasp attack.

Best Defense: Before trimming shrubs or picking fruit, carefully check plants for paper wasp nests. Also, check soffits and overhangs on your house for the umbrella-shaped nests. Paper wasps are generally uninterested in human food and drink, so they usually won’t bother your gathering unless it is close to a nest.
You can treat wood fences and deck railings with a repellent oil to deter paper wasps from gathering cellulose from the wood. This can encourage them to move on from your property on to greener pastures.

If you suspect you have a paper wasp infestation or find a nest on your home or property, it’s best to call a professional. Usually, when people get stung multiple times by paper wasps, it is during a nest removal.

Often times it can be difficult to determine the exact species of stinging pest you have on your hands. If you find yourself in this position, an ABC licensed inspector can evaluate the type of stinging insects around the home and yard. Due to the variety of bees and wasps it may require bringing a sample back to our facility to be identified by our on staff certified entomologist.

ABC Houston Has You Covered
ABC is here for any needs you or your house might have. Whether you need lawn services, HVAC & AC services, pest control or more - ABC is here for you!
Schedule A Service