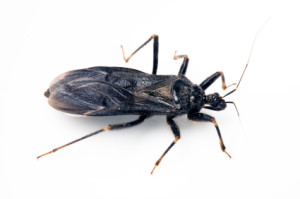 The kissing bug is not as cute as it sounds. In fact, its other nickname, the assassin bug, may be more accurate. Scientifically known as triatomine bugs, these insects are more than just bothersome. They can carry Chagas disease, which is potentially life-threatening. Although the kissing bug is more common in Mexico, Central America and South America, the pest has been found in 27 of the U.S. states, including Texas, according to the Centers for Disease Control and Prevention.

What is Chagas Disease?

Chagas disease is a parasitic disease that is transmitted to mammals through the feces of the kissing bug. The kissing bug feeds on the blood of animals and humans, usually during the night. The insects tend to bite the faces of humans, leaving behind droppings near the bite wound. If the droppings, which may be infected with the parasite that causes Chagas disease, are rubbed into the wound, the person could become infected. The disease can also be transferred through blood transfusions, although most blood banks now screen for the disease.

Where are Kissing Bugs Found?

Kissing bugs tend to live outdoors but have been found in cracks and crevices inside of homes, especially in areas where conditions are less than sanitary. Indoors, the bugs can be found under mattresses and nightstands or in areas that are infested with rodents. Outdoors, kissing bugs may be found in chicken coops, dog houses and under porches. Kissing bugs have been found from San Antonio, Texas, to Salt Lake City, Utah, and beyond.

How Can You Keep Kissing Bugs Away?

Although some insecticides have been approved for use against kissing bugs in Latin America, none have been explicitly sanctioned to kill the bugs in the United States. Taking preventative measures can help stop the bugs from inhabiting your home to begin with, especially if you live in a city or state where kissing bugs have been found. Seal all cracks around your windows and doors, and make sure your crawl spaces and attic are properly sealed. Keep rock piles and wood piles away from the walls and foundation of your home. If your pets sleep outdoors, make sure their resting areas are clean and free of bugs. If you live in San Antonio, contact us at ABC Home & Commercial Services. Our pest control specialists can inspect your home for the insects and provide appropriate treatment if necessary.