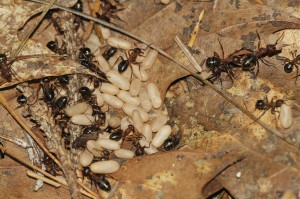 Some fire ants burn hotter than others

Red imported fire ants have become a serious problem in the Dallas area. They behave more aggressively and possess stronger stingers than most other species. This fast-moving ant has few natural enemies in Texas, so it continues to infest new areas. Large groups of fire ants may attack pets, livestock and people who disturb their mounds.

When you see small, dark-red insects that measure at least one-sixteenth inch, they might be imported fire ants. The largest workers grow up to one-quarter inch long, and their antennas consist of 10 tiny segments. Don’t stand next to a mound to inspect these bugs. It’s much safer to find a dead insect before using your magnifying glass.

Although it has been known to infest buildings, this invasive pest usually stays outdoors. You may feel its fiery sting if you work or recreate in a field, park, playground or yard. This bug’s venom maintains a higher level of toxicity than DDT, according to the Houston Chronicle. The stinger will probably leave an itchy pustule on your skin.

If you’re particularly sensitive to fire ant venom, you might experience swelling, breathing problems or other ailments. Unlike most species, the red imported fire ant may sting you multiple times and cause more serious medical conditions. Sting sites can also become infected; be sure to keep the skin as clean as possible.

Fire ants pose a greater danger when they enter homes. If these assertive insects invade your furniture, bedding or clothes, it becomes much harder to avoid them. Texas A&M University warns that property owners may even face lawsuits if numerous ants attack their guests. This species can damage electrical wiring as well.

You may have heard that imported fire ants only cause problems in the summer. It’s true that hot weather makes them more active. They normally don’t look for food until the soil temperature hits 70 F, according to Texas A&M. Nonetheless, CBS Local reports that they sting Dallas residents in every season.

You may wonder how imported ants differ from their indigenous cousins. The local species also delivers painful stings, infests buildings and raids pantries from time to time. Fortunately, it doesn’t attack or sting as aggressively. Native ants have more natural enemies, so they remain somewhat easier to control.

If native or imported ants invade your property, consider calling a pest control specialist. The professionals at ABC Home & Commercial Services have the training, equipment and materials needed to tackle stubborn fire ants. In addition to exterminating these pests, we’ll find their entryways and seal them out of your home. For a lasting solution to any ant problem, contact us today for a free estimate.