There is a bed bug “season” after all.

Schools out for summer and many families are ready to head out for the busiest travel season of the year. We are all for bringing home vacation souvenirs. But there’s one thing we hope all our customers can avoid this summer: Bed bugs.

Most of us never imagine that we’ll pick up dreaded bedbugs and bring them into our homes after a trip to the beach. Prevalent in the pre-WWII era, bed bugs were nearly wiped off the map in the 1950’s due to increased use of pesticides and better hygiene.

They’ve made a comeback starting in the early 2000’s, with a widely publicized epidemic after the 2000 Sydney Olympics. Authorities claim the reasons for the surge in bed bugs are varied – population increases in cities, the ease of global mobility, and pesticide resistance all bare some responsibility.

How do you get bed bugs after a family trip?

Bed bugs like to live in human living areas – on mattresses, furniture, and carpets, for example. They hide inside the seams of mattresses, curtains, bedding, etc, where they can easily climb on you and all of your belongings. You can get bedbugs just from the presence of one female fertile bedbug! She can lay 200-500 eggs in her lifetime, typically laying between 2 and 5 eggs per day.

So, why do appear to bed bugs surface more often during the summer months? The most obvious reason is the increase in travel during the summer. With school out, families and students of all ages take advantage of free time to plan trips to a wide variety of locations. Contrary to popular belief, bed bugs do not live on or travel via human bodies. They don’t like intense heat, and prefer the cooler temperatures of beds, backpacks, and shoes, where they can hide inside seams, hitch a ride and breed in new places. And they don’t discriminate between dirty or clean living spaces – any place will do. You can even find bed bugs in 5-star hotels.

Bed Bugs thrive in summer temperatures — to an extent. 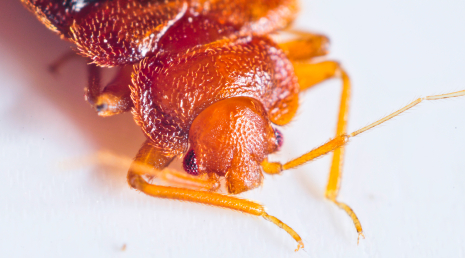 Regardless of the time of year, bed bugs are becoming more resistant to pesticides. Researchers have found that bed bugs are now resistant to neonicotinoids, the most commonly used pesticide in the world. To kill bed bugs with neonicotinoids, you’d need to use concentrations of 1,000 percent or larger. DDT was widely used in in the 1960’s and 1970’s before being banned in 1972, but authorities say most bedbugs were already resistant to it anyway. Pyrethroids are the most common chemical used to kill bedbugs today. They work similarly to DDT in that they block sodium channels, and bedbugs are already becoming resistant to them as well. Scientists recommend a new focus on eradication methods using non-chemical means – heat, vapor, and encasement are a few examples.

Heat remediation is the best way to kill off bed bugs.

Treating bed bugs is becoming increasingly difficult as they gain resistance to newer chemicals. If you suspect an infestation, contact a professional exterminator as soon as possible to help minimize the possible impact. ABC offers bedbug control services. We’ll come to your home for a free inspection, and in most cases propose Heat Remediation to eliminate the bedbugs. This service is non-toxic and allows you to return to your home almost immediately once it is applied. Contact ABC today to schedule a consultation.