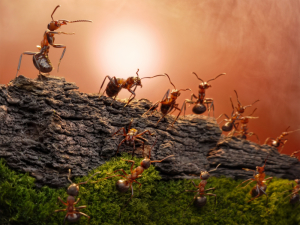 Figuring the odds on fire vs. crazy

When you first heard about their amazing ability to kick the stuffing out of fearsome fire ants, you were probably impressed with crazy ants. Since the early 2000s, this invasive new species has established its own ferocious reputation, and homeowners from Houston to Dallas are caught in the middle. Should you take sides?

Both ant species hitchhiked here from South America where they were already mortal enemies. Perhaps the rivalry began over homebuilding styles. Fire ants take a traditional approach by constructing large mounds in backyards. As their population grows, they branch out with those familiar dirt piles that mean trouble for bare human feet. Crazy ants start out in the lawn, but they aren’t satisfied with life outside. These deranged pests push their colonies into home interiors by nesting in walls and crawl spaces, and they enjoy setting up house in electrical equipment.

Fire ants go about their business tunneling under the lawn without much fuss. They don’t bite unless you start something. One misstep on a fire ant mound is all it takes to understand how badly a tiny insect can sting. Crazies got their nickname from their hyper behavior, and these little ants swarm into huge mobs when disturbed. Their bite isn’t severe, but their numbers are overwhelming, and they’re very aggressive. If you’re picnicking between crazy ants and their nest, don’t expect these belligerent bugs to go around you.

Las Vegas isn’t giving odds yet, but many Texas homeowners would bet on crazy ants to win this insect war. These persistent pests are much harder to handle than their cousins because they expand their nests into super colonies while ignoring most pesticides and poison baits. They don’t have any natural predators, but they do have a natural weapon against fire ants. During battle, crazy ants secrete a substance that neutralizes fire ant venom, and they follow the wash, rinse, and repeat routine until they finally overwhelm the enemy with sheer numbers.

The fight between these tiny marauders will play out for years, but the crazies seem to have the advantage for now. If you suspect these insane ants are feuding on your property and you’d like some advice, give us a call here at ABC Home & Commercial Services of Dallas. When bugs do battle, we don’t take sides. We take pest control action.