Imagine the scene: you’re outside enjoying the summer weather in your backyard or by your pool, and you spot a mass of tens of thousands of bees swarming on a tree or near a fence. That visual is pretty terrifying – so much so someone decided to make a horror movie called The Swarm, where a mass of killer bees terrorizes and kills people all over Texas! The irony of it all is though the swarm may appear menacing, bees are much less likely to be aggressive in swarms due to their vulnerability. Swarming is a natural occurrence that is absolutely necessary for the propagation and survival of bees.

To understand why bees swarm, you first have to know how a bee colony is set up 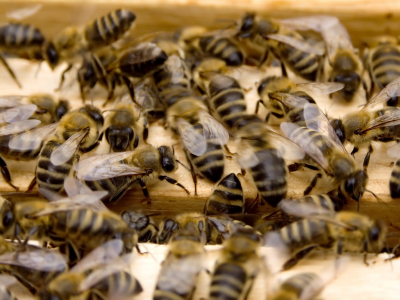 A bee colony consists of several different types of bees. There is only one queen bee in any given hive. The activity of the hive revolves around the care and feeding of this queen so that she can produce as many eggs as possible.

The hive is comprised of female worker bees. They do the bulk of the work including cleaning the hive, feeding larvae, building the comb, protecting the hive and gathering nectar and water.

Male bees are called drones, and they have one purpose – to mate with and impregnate the queen. If they are successful at mating with the queen, male drones will die.

The queen bee’s sole responsibility is to reproduce. She will leave the hive only to travel with a swarm and mate with drone bees. Once she is impregnated, she’ll return to the hive and lay an egg once every 20 seconds. That’s about 2,000 eggs per day!

As she reproduces, the female worker bees tend to her larvae so they will develop into mature bees. The worker bees’ tasks are divided based on the age of the worker bee. The youngest worker bees do housekeeping on the cells, then move on to feeding larvae, and finally, they leave the hive to find food and pollinate plants.

So given this complex infrastructure of bee colonies, why do bees swarm?

As the queen lays eggs and those eggs develop into larvae, the number of bees in the hive swells. The more bees in the hive, the harder it is for the bees to receive the signals from the queen bee’s pheromones.

When there are too many bees and the pheromone signals become distorted, a new instinct kicks in with the worker bees – they start to create a new queen.

Queen bee eggs start out the same as the ordinary worker bee egg, but the worker bees differentiate them by feeding them a special food called royal jelly and protecting them in specialized queen cells, which hang off the bottom of the hive.

The current queen lays eggs in the queen cells and leaves the hive shortly after, which is known as a prime swarm. In between laying those eggs and leaving, she is deprived of food to make it easier for her to fly in the swarm.

So bee swarms are caused by the reproductive cycle of the bee colony as a whole. The old queen must leave to make room for the new queen to reproduce, and to continue the reproduction cycle herself. Queen bees can live up to 5 years, so she may have many more eggs to lay in a new nest.

What should you do if you see bees swarming?

Now you know that swarming is a natural process necessary for the propagation of bees – albeit still a scary one.

First and foremost, leave the swarming bees alone. Swarming bees are focused on finding a safe location and protecting their queen. They are not likely to sting and will probably move on to a new home within 24 hours or so.

If you are uncomfortable with their presence, don’t take matters into your own hands. Get help from a professional beekeeper instead.

Bee colonies have been decreasing for several decades due to an occurrence called colony collapse disorder. A skilled beekeeper can collect a bee swarm and transfer it to a bee farm, which may help diversify the genes of bees on the bee farm.

You can report a bee swarm in the Central Texas community here and a beekeeper will acknowledge it and come to claim the swarm.

Bee swarms can be intimidating, but they are a pretty amazing part of a bee colony’s reproductive cycle. Like many things in nature, the best course is to leave them alone and let them take their course.