Scientists are biting back against mosquitoes in Texas

Are mosquitoes getting you down? Not only are they an itchy menace, but mosquitoes can also carry diseases.

Because of the threat to human health, scientists are searching for new ways to reduce mosquito populations. Researchers from around the country, including some at Texas A&M in Bryan-College Station, want to find alternatives to pesticides, which kill beneficial insects and pose health risks to both animals and humans. Even worse, pesticides present only a temporary solution since mosquitoes can develop resistance to their effects.

These entomologists and epidemiologies study both the mosquitoes themselves and mosquito-borne diseases such as West Nile and Zika, in a quest to discover better ways we can protect ourselves from mosquitoes.

While the threat of the West Nile virus has worried doctors for a while, now Texas also needs to worry about the Zika virus. So far at least 27 cases have been reported statewide, though so far all infected people had traveled to a country where Zika is endemic and then returned home with the disease.

Even though our local mosquitoes in Bryan-College Station haven’t shown signs of Zika yet, it’s still a major concern. There are links between the virus and people developing illnesses such as Guillain-Barré syndrome and autoimmune diseases. Pregnant women also may stand a higher chance of giving birth to children with microcephaly.

What scientists are doing to help

At Texas A&M, scientists are working on a way to make people less susceptible to mosquito bites. Part of this research involves studying what makes mosquitoes prefer some people over others. They’ve discovered that mosquitoes tune into the microbes on our skin. If they can figure out what makes one person more attractive to another, they may be able to develop chemicals that will be more effective than current repellents.

Elsewhere in Texas, Harris County scientists are trapping mosquitoes throughout the county and testing them for West Nile and other mosquito-borne diseases. They then use this data to proactively determine which areas of the county need to spray for mosquitoes. By taking a concentrated approach rather than spraying everywhere, this research helps municipalities save money, it reduces the amount of pesticides released into the environment and makes it less likely the insects will become resistant. 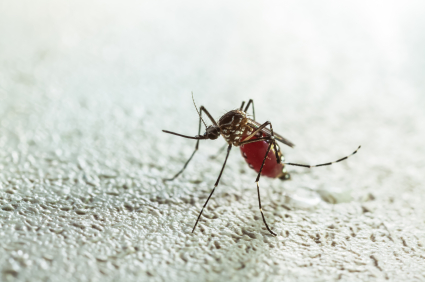 One fascinating advance comes from Oxitec, a British company. They are introducing a synthetic gene into mosquito eggs. This gene forces the mosquitoes to overproduce proteins, which kills them. The scientists found that by treating the modified mosquitoes with an antidote in the lab, they can keep the insects alive so they can be released into the wild. When they breed with other mosquitoes, however, the gene gets passed down and none of the offspring survive. According to the New York Times, in the area where these genetically-altered mosquitoes were released, there was an 82% reduction in wild mosquito larvae.

Entomologists in Los Angeles are trying a similar tactic. Male mosquitoes are being infected with the Wolbachia bacteria, making them sterile. Scientists hope that when insects are released into the wild and mate, the eggs won’t ever hatch.

Meanwhile, Dr. Leslie B. Vosshall, a mosquito researcher at Rockefeller University, wants to build a genome map of the Aedes aegypti mosquito. This species, also known as the Asian Tiger mosquito, is one of the primary vectors for yellow fever and possibly the Zika virus. Her Aedes Genome Working Group is working tirelessly to bring together scientists and funding to find a solution to a mosquito that is showing resistance to pesticides. Because of the urgency, many scientists have joined up in the fight, and this year they are making real progress to filling in the gaps in their knowledge of the mosquito genome.

What you can do to reduce mosquitoes at home

While researchers continue to search for ways to reduce our exposure to mosquitoes, there are still a number of ways you can keep from becoming a mosquito’s next meal.

Here are a few tips:

If you’re still fighting off hordes of hungry mosquitoes, ABC Home and Commercial Services Bryan-College Station can help. Our professionals can provide single mosquito abatement treatments of your property, or a more permanent solution, ask us about our perimeter misting systems.

If mosquitoes are getting the best of you this summer, just give ABC a call!